Looking back I see that I created a total of 29 contact sheets for the three sets of photographs taken between July 2018 and November 2019 and the total of images taken was 346.

I had taken many similar images to begin with on the basis that I might want to layer some into composites so knew decisions would have to be made on those at some point.  For the time being I kept them as they were for editing further down the process as I was hoping that, through the editing, I would gain a clearer idea of how I wanted to proceed.  What I mainly had in mind was presentation as a book but perhaps there could be other groupings of the same areas in different seasons – thinking here of the tree that became a Christmas Memorial tree for a few days; the Spring Memorial flowers; the ‘Viewpoint”; the forked birch tree and the area where a shelter was briefly constructed near to an installed bird box. Each of these are, after all, a chapter in the overall narrative of Ether Woods.

Other questions were should I include people or not and, if so, which people?  Should I allow photographs taken in the Memorial Fields below to merge with those in Ether Woods?  Where is the boundary between both those – the beginning of paths, the benches, or the division between mown grass and trees? I put those questions to one side for the moment whilst I proceeded to a third edit which involved deconstructing and reforming the monthly series into Seasons so I could see the changes in light, tones and hues more clearly.

The breakdown of Seasons and further pruning reduced the number of photographs to 228. I decided, for the time being, to begin with Summer as Summer 2018 was when I began with the Memorial Fields and Ether Woods as a subject. To keep a clearer focus on what was happening in the woods I then extracted images of playground and sporting activities. I also separated out a series of smaller seasonal details of leaves, blossom and chestnuts, most signposts and benches which could be used as appropriate ‘punctuation points’ for potential series.  Contact sheets of benches (there are two versions of image 3007) and smaller details are below 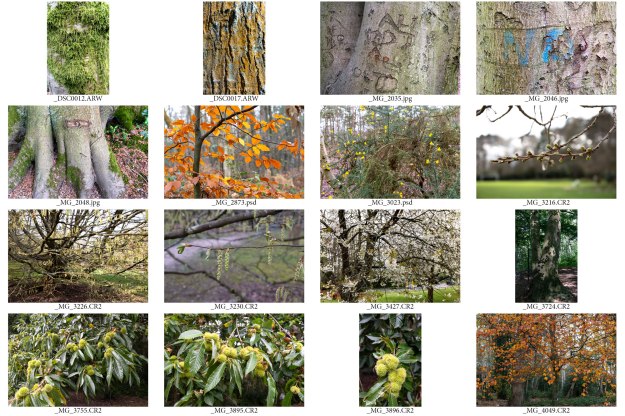 This left me now with 151 images within the woods.

This edit resulted in a further reduction to 90 images, still grouped in Seasons, some of which span two years, and I think that I will need to make a decision whether to separate Seasons into separate years, which I now feel inclined towards but will discuss with my tutor. Contact sheets below. 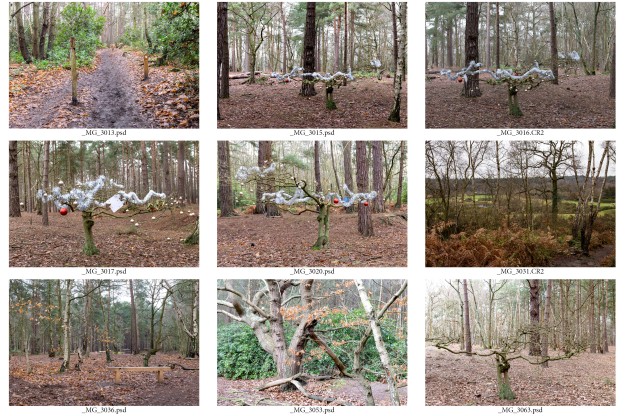 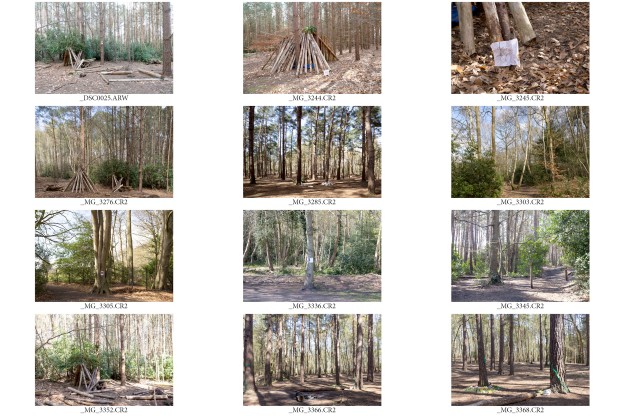 By the time of the fifth edit I had decided to prune images which were similar on the basis that I was unlikely to be considering multi-exposure/composites at this stage.  This reduced the images down to 68 – remembering though that this did not include any images I might use from the benches over the seasons and detail images. 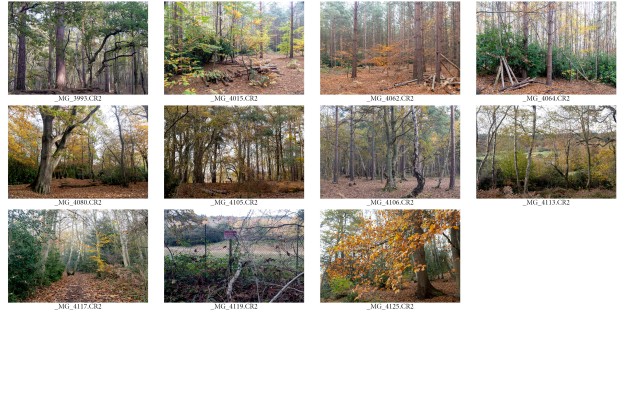 The Seasons are bound together by images of the path; forked birch; benches on both the periphery and overlooking the viewpoint; the viewpoint; the memorial tree with and without decorations; the clearing with logs and signs – yet each Season is distinctive, particularly Autumn where the trees on the periphery flourish their colours.  I’m thinking that Autumn could form a separate series within itself, although of course, Winter has the memorial tree and snow; Spring has the memorial flowers and bird box clearing.  Summer, at least in my photographs plays much less a part.

At this point I decided to leave the editing until the next day with the hope that my thoughts might gel overnight as to which way to go next as I needed to produce at least one series for submission to my tutor. I will also reconsider the some of the benches and seasonal details that I extracted earlier.